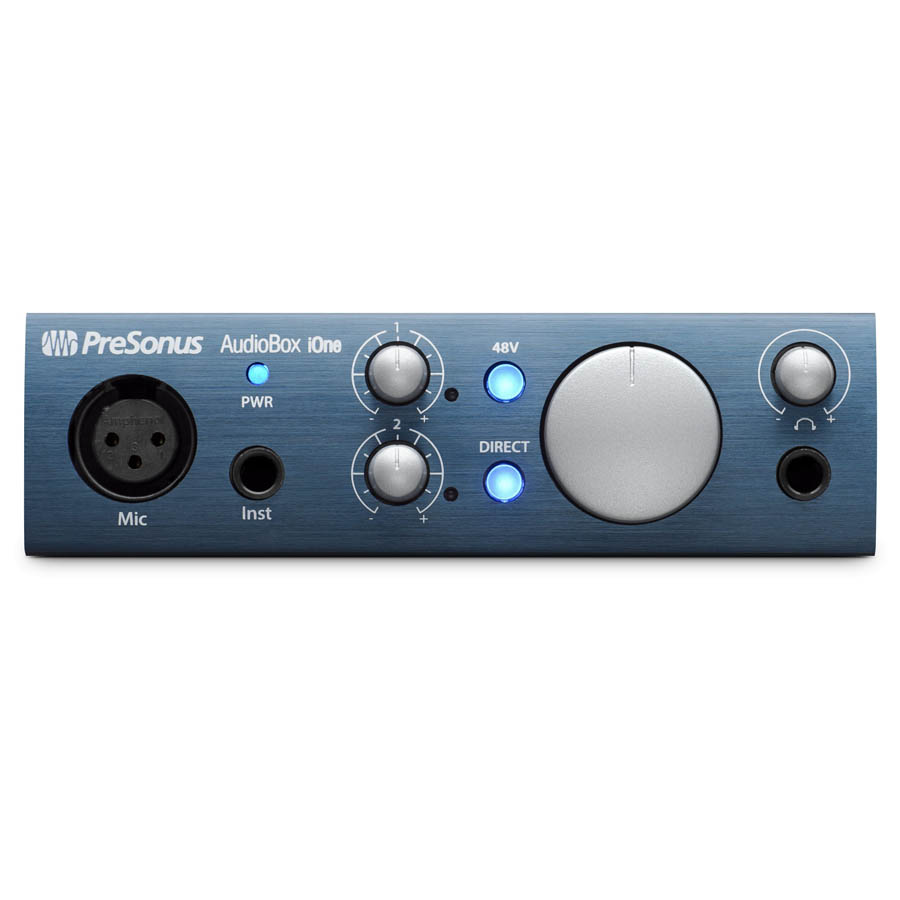 Current Default Location
left in stock in
View all locations
Low in store inventory, may be subject to change

The audio interface for guitarists and songwriters on the go.
Inspiration is everywhere for singer/songwriters, so bring your studio with you and record wherever you go. The two-input PreSonus AudioBox iOne lets you capture your voice and instrument on your Mac, Windows PC, and iPad. Simply plug in your guitar and microphone, and you’re ready to create! USB bus-powered and bundled with powerful, easy-to-use recording software, the AudioBox iOne makes it easy to capture ideas and create professional-quality recordings.

Mobile recording made easy.
The AudioBox iOne audio interface and its software library make recording your compositions and tracks easy! Record in stereo on your iPad with free Capture Duo or record up to 32 tracks with affordable Capture for iPad. Then wirelessly beam your iPad tracks to our award-winning Studio One recording and production software for macOS and Windows for editing and mixing. Or do the whole project on your laptop with Studio One. Either way, the AudioBox iOne and its software library provide all the tools needed to record on the road and in the studio. You also get Ableton Live Lite.

Loud and clear.
To record great-sounding music, you need outstanding preamps and digital converters. And to hear what you’re doing, you need a headphone amp that keeps up with the rest of the design. The AudioBox iOne audio interface delivers it all! We’re famous for our award-winning microphone preamplifiers, and we’ve equipped the AudioBox iOne with a sweet-sounding mic preamp that will capture your voice in all its glory. Clean, clear, 24-bit, 96 kHz digital converters and an ultra-loud, crystal-clear headphone output ensures you hear every detail.

Built to travel.
AudioBox iOne is a mobile audio interface in the best sense of the term. It can sit on a tabletop or fit in the pocket of a backpack or laptop bag and works with standard iOS power accessories. Its metal chassis is built like a small tank—yet it weighs just 1.35 pounds (0.63 kg). Wherever your travels take you, whenever your creative muse calls, your AudioBox iOne audio interface will be ready to help you compose and record your masterpiece. Check it out at your favorite PreSonus dealer.

The PreSonus AudioBox iOne is natively compatible with Apple Silicon-based Mac computers, as well as iOS and iPadOS devices, including iPad Pro, iPad, iPad Air, iPad Mini, iPod Touch, and iPhone. Because it's USB class-compliant, there are no special drivers or applications to download and install. You'll be able to produce on the go—everything from podcasts to folk rock to trap—wherever sound takes you.